skip to main | skip to sidebar
MOST RECENT BLOG POSTS :

I caught the demo-reel of Opera Omnia's "Coronation of Poppea" tonight at Le Poisson Rouge, so now I'm going to pretend that I review shows all the time, like Majel, or Alex Ross.

For some time I think I may have been weakly masquerading as some kind of performance-purist, demanding opera in the original language or not at all, but this group's English-language rendition completely won me over (ie: it's the opposite of listening to the English version of Nena's "99 Red Balloons"). There was no cognitive lapse between hearing/reading/understanding, no frantic up and down of the eyes, watching action and titles, no getting lazy and letting a title or two pass by unread. In fact, I'm now tempted to go rent "The Lives of Others" in some kind of un-subtitled voice-over version and watch it while I eat a big box of Freedom Fries. Maybe this will be Opera Cabal's next project. And who am I kidding, anyway? As though I know Italian well enough to appreciate Monteverdi's exquisite musical parsing of syllables in real-time? Right.

The Red Fish (as long as we're throwing foreign languages out the window tonight) is a bit on the dead/flat/non-resonant side of the acoustic spectrum, but as it turns out, while not being "kind to voices" in any traditional big-resonant-hall notion of the idea, is ideal for actually being able to understand the text...except when singers turned upstage. Again with the English language performance version thing. Handy coincidence, that. 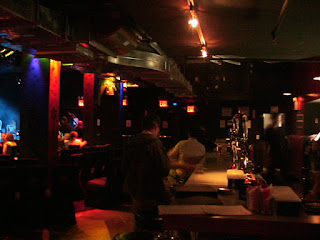 (The bar IN the performance space)
*** 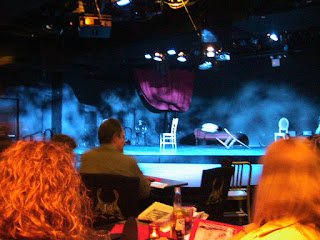 (The stage, from my first-row-behind-the-cabaret-tables seat. Sit close, there's a loud air-conditioner that keeps clicking on from the back left of the house.)

But let's get down to details. I previously accused Monteverdi of homo-erotic misogyny. After seeing Poppea (and all of you who know better, please reel me back in after I go off the speculative deep end / my run-on sentences get too runny), it occurs to me that Monteverdi, while writing L'Orfeo, was just plain young. He didn't leave out the women because he hated them, he left them out because he didn't have the chops to handle multiple complex characters. Maybe he thought that giving us the "first-person" account of Orpheus's adventures was the strongest way to do it -- certainly it's the most direct. And then he wrote a bunch more operas, and in the process (judging by the almost Shakespearian/Mozartian complexity of dramatic intrigue in Poppea) learned the joy of creating the plucky sidekick, the three varieties of scorned lover, and the wise-fool of a matronly nurse who gives us the one truly Shakespearian aside when she says that in this life she was born a servant and will die a Lady, but in the next life would prefer to be born a Lady and die a servant because servants are happier when death comes. His handling of multiple characters in Poppea, all of whom are endowed with multi-dimensionality, is simply more mature than the one-dimensional portrayal of Orpheus and his cameo-esque cohorts. I'm sure somebody somewhere has discussed Mozart's operas in the same terms (his name might be Joseph Kerman...but I forget.)

The Omnia players do a great job of bringing out the complexity of their characters, but one thing really troubles me about the piece. If we view the characters as complex, motivated by multiple forces in a dynamic world (and are at times even brutally ironic) then the final love-duet between Poppea and Nero, both of whom we mostly hate, is bizarrely out of place. It's awkwardly sincere. How can we possibly be privy, for example, to the complexity of Drusilla's situation (as she stoically walks off stage singing "My heart rejoices" because of Ottone's fervent insistence that he "wants her"), and yet see nothing but a happy couple at the end? One would think that we should have a sense of hanging dread, or woeful resignation, or maybe just a little queasiness in the belly at the thought of the couple's joy having been wrought from the murder of Rome's great philosopher/statesman/dramatist, the barely rationalized exile of the queen, etc....or am I too hung up on Berg? The final duet is, as I said, awkwardly straightforward, as though Monteverdi thought we'd been cheering for these two to live happily ever after all along. I don't get it. Music Director, Avi Stein, comments in his notes that this duet may not even have been Monteverdi's...and indeed, had the opera ended with the drawn-out instrumental coronation music, there might be something unsettling about the final "silent" (as in, unsung) image of tyrannical king and new young, ambitious queen together.

Speaking of Avi Stein, here's the band and the one-armed throne. No theorbos in sight. 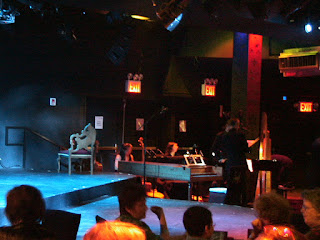 Perhaps the really great thing about this performance is that we don't see Poppea as simply another ambitious young woman who will stop at nothing blah blah blah. Hai-Ting Chinn brings out incredible subtlety in the character, at times caught up in sexual fervor for Nero, at times an unsure young girl who might be getting in over her head trying to become queen to a man who commands, without hesitation, the murder of his closest adviser and exile of his former wife. I can't say that I cared either way about Poppea's fate, which is good...I like ambiguity...but I imagined that I could understand all of the bizarre ups and downs of being Poppea, which struck me as even better than either simply cheering for or against. 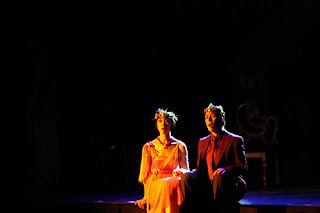 Hai-Ting Chinn (Poppea) and Cherry Duke (Nero)
(photo by Matthew Hensrud)
As I said, the cast, is, across the board quite convincing, but a couple of other stand-outs include Marie Mascari as Fortune and Valletto, the previously mentioned plucky sidekick character with no shortage of pluck... 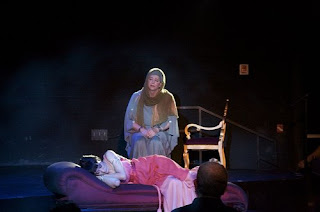 Poppea and Arnalta (John Young)
(photo by Matthew Hensrud)
...and Cherry Duke's Nero was as hot and cold and impetuous and disgustingly regal as we'd expect a young Nero to be. 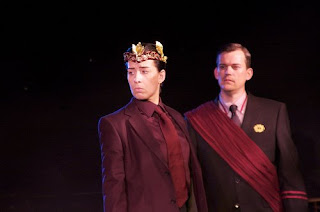 Cherry Duke (Nero), Richard Lippold (Littore)
(photo by Mathew Hensrud)
The set consists of 5 chairs, a one-armed throne, a curtain, a step ladder and a fainting-couch, which begs the question, has anybody EVER actually SEEN a fainting-couch EXCEPT as theatrical prop or in the halls of kitschy old hotels? Crystal Manich's stage direction is at times great -- ALL of the constantly varied seduction scenes...

Poppea and Nero go at it...WHILE singing...
(photo by Matthew Hensrud)
...and particularly between Nero and his man-servant (but you'll have to show up to see both that scene as well as the borderline scandalous use of an over-sized Russian doll) -- but at other times was surprisingly uninspired -- the death of Seneca. Still, for anyone still reading, I highly recommend. Bravo on a first production, y'all. 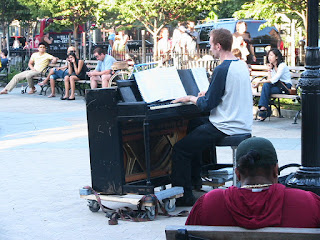 Yup...piano busking. He was playing one of the waltzes from Amelie.

If it helps, while I personally love the "the bad guys win" aspect of the whole thing--delightfully wicked, part of the answer to why Monteverdi thought the ending was acceptable (even if he didn't write it, he almost certainly approved it, and in any case we have to explain why a 17th-century librettist and public thought it was okay) was that the audiences of the time would have known their Roman history, and had in the backs of their minds the fact that Poppea would wind up stabbed to death by Nero while she was pregnant, Nero was bound for insanity and death, and Ottone would eventually wind up emperor.

Thanks for the nice write-up!

What the Press is Saying

"A thrilling contrast to Lyric Opera and Chicago Opera Theater...Opera Cabal exhibits the audacity and daredevilry rarely found in anything calling itself 'opera' these days."
Time Out Chicago

"Whatever you want to call it, this production takes its audience on a wild, compelling, multimedia ride..."
Time Out New York

"Opera Cabal showed what’s possible when tradition is eschewed, but that tradition still has something to say, and it helps to contextualize the experiments."
Time Out Chicago

Opera Cabal is Ensemble in Residence at

From the Outside Looking In

Opera Cabal Performing Arts Association NFP is reshaping how opera is imagined, produced and performed in the United States. Composed of a versatile collective of adroit, accomplished young artists, Opera Cabal propels the opera of today by presenting unpredictable new work and modeling new forms of audience involvement. In an era of rapidly changing audiences and shifting musical genres, Opera Cabal embraces interdisciplinary collaboration, new commissions, and intimate and unusual venues. Opera Cabal reaches into to neighboring visual, theatrical and technological communities to broaden the audience for and the definition of opera in a new century, reviving the integrity of a revered art form with an infusion of new energy and eclectic design.

Since its founding in 2006, Opera Cabal has identified and recruited artistic teams working at the highest level in fields traditionally unrelated to opera in order to bring new blood and fresh ideas to the art form. Opera Cabal’s commitment to building a diverse, engaged audience for opera in the 21st century is exemplified behind the scenes by the Hyde Park Salons, a monthly performance series established in 2006 on Chicago’s South Side. The Salons serve as a forum for local artists and scholars, offering a rigorous workshop atmosphere for uncommon contemporary performance. Opera Cabal is also the commissioning force behind the brand new project series, Opera Shop (begun in 2011). In partnership with our co-producer, High Concept Laboratories, Opera Shop introduces each autumn the work of one new team of exceptional artists with a history of working together outside of opera to explore cutting-edge approaches to recombining music and theater.